The perfect balance between Danish know-how and Romanian tradition.

Our story begins in 2001 when 13 Danish farmers decided to engage in a challenging project and set up modern pig farms, operating at the highest standards, far beyond Denmark’s borders.

The founders chose Canada, which had a high market potential. Thus, the newly established Danish Canadian Holding A/S created a bridge between two countries with a long tradition of growing pigs.

In 2006, stimulated by the market opportunities offered by Eastern European countries, the company decided to focus its attention on the Romanian market as well. Here, the company acquired, renovated and reconditioned a farm complex built during the communist period. With the geographical expansion, the company name was changed to DCH International A/S. 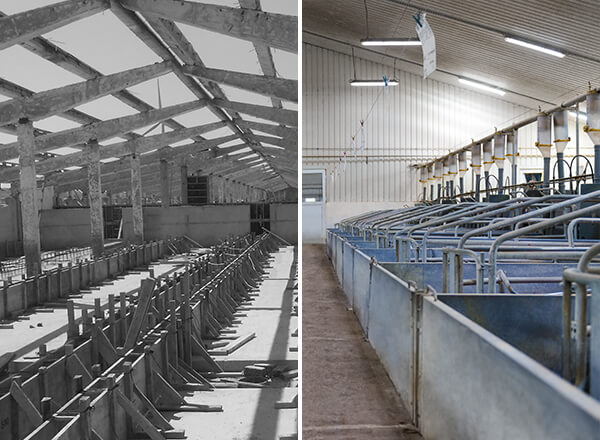 Growth in Romania has been steady and fast; we acquired farms that were considered pillars of the Romanian pig production industry, equipped them with modern technologies, adopted the most stringent biosecurity and production standards, controlling every part of the production process. In addition, we are producing our own feed, part of the crops and fully manage manure management and large investment projects.

Premium Porc Group quickly became the second largest pig producer in Romania. In the meantime, the company has decided to withdraw its operations from Canada and focus its resources solely on the production in Romania.

Currently, Premium Porc Group consists of 11 companies, with partial vertical integration in the value chain, producing over 600,000 pigs per year, and with investments of over 115 million Euro over the past 13 years in Romania.

Denmark is one of the leading pig producers world-wide, with more than a century of experience in professional pig farming.

With a strong focus on efficiency, Denmark has produced a world-renown system for professional pig farming, with some of the best results in the world. It comprises of excellent pig breeds, modern farming technology, refined farm management techniques and a unique approach to people management.

We have managed to implement Danish expertise within Romanian pig farming, generating exceptional production and organizational results. Being in the top 10% of European producers, in terms of efficiency, Premium Porc Group is a key player in the Romanian market.